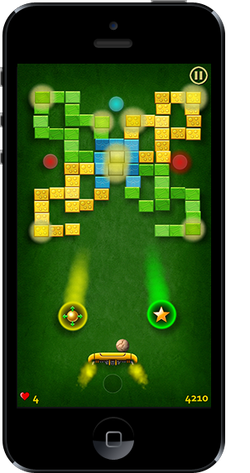 Destroy all static and moving bricks and obstacles to win the level. Touch and move left or right the pulsing circle under the pad to control it. Touch anywhere higher to release a ball, launch a rocket or shoot with plasma gun.

Shining blocks contain bonuses that can seriously change the situation.  Green power-ups  will help you to cope the task – such as ball splits, rocket launcher, plasma gun, fire ball, acid ball, magnet, shield and so on. Try to avoid red power-downs, that can speed up balls, decrease board size, make balls flight trajectory unpredictable or even explode the board./test

A must have for all fans of arcade games such as arkanoid or breakout!